Wine is a sherry if it meets the following conditions-

It is made from white grapes which are grown close to Jerez de la Frontera town in Spain.

Phoenicians introduced winemaking to Spain in 1100 B.C. and Jerez was the central town for the winemaking activities. Distillation was introduced to the region by the Moors in 711 A.D. During that period, the town was known by the name of ‘Sherish’ and is the origin of names ‘Sherry’ and ‘Jerez’. Under the rule of Alfonso X of Castile, the production of sherry and its distribution throughout Europe increased remarkably in 1264 and by the sixteenth century Sherry was famous as the ‘world’s finest wine’. 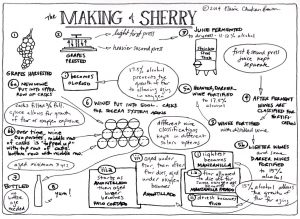 Fino – Palest and driest among the varieties. Has 15-17% alcohol.

Manzanilla – The lighter variety of Fino Sherry. Has 15-17% alcohol.

Manzanilla Pasada – This variety is derived when the aging is extended for the Manzanilla variety or if it has undergone partial oxidation.

Amontillado – This variety is aged under ‘flor’, which is yeast-like, that prevents the oxidation but later exposed to oxygen it develops into a Sherry darker than Fino but lighter than Oloroso. Has 16-17% alcohol.

Oloroso – The aging period of this variety of sherry is longer than Fino or Amontillado which produces darker and richer wine. Is often termed as the most alcoholic sherries. It is a high alcohol wine with 17-22% alcohol by volume.

Cream – Sweet Sherry, made by blending Pedro Ximénez and Oloroso. Has high sugar content and 15.5% to 22% alcohol.

After fermentation of grapes(primarily Palomino grape), the next step is to fortify the wine with the help of Grape Spirit (one of the substitutes of brandy) to raise the alcohol level of the wine. If the wine is to be developed into Fino and Manzanilla then the wine is fortified further until it reaches a level of 15.5% alcohol by volume. These wines are then barreled and develop a yeast-like substance called ‘flor’ which prevents the excessive oxidation of the wine. From this point, wines that are to be aged as Oloroso are fortified until they reach a level of 17% ABV(alcohol by volume) but this time ‘flor’ is not developed and these wines get oxidized and get a darker color.

Sherry is aged through the Solera system. Group of containers of different ages of sherry, a usual difference of one year apart from each other, are kept. Contents of the container having the most aged sherry are taken out for bottling and are filled with second-most aged sherry and the same process is repeated to all the containers till the youngest which is filled with the new sherry. This way the final product obtained is a blend of different ages.

Why People Need to Use Toner Cartridge In Printer

Never Miss Out These Incredible Flavours To Buy Popcorn Online

Know The Easy 4 Steps To Be A Popcorn Manufacturer Melbourne

Some Amazing Benefits of Popcorn That You Weren’t Aware of

Good Wedding Catering – A Sure Step to A Successful Wedding Reception

What Are The Benefits Of Wearing Skirts?

Prev Next 1 of 166
Archives
Categories
Meta